A resource for technical documentation. Datasheets, application notes, instruction manuals, books and links to resources are found in the Document Library.
Post Reply
1 post • Page 1 of 1

I rescanned and tiled the MicMix Dynaflanger schematics that Bill Hall and I did in 1978. Bill had come up with a crude prototype based on the earlier TimeWarp and then left the company. My task was to help John Saul make it manufactureable and bring the unit to production.

A circuit description follows the drawing. Since I did this design over 36 years ago my recollection of it is a little foggy so please bear with me. 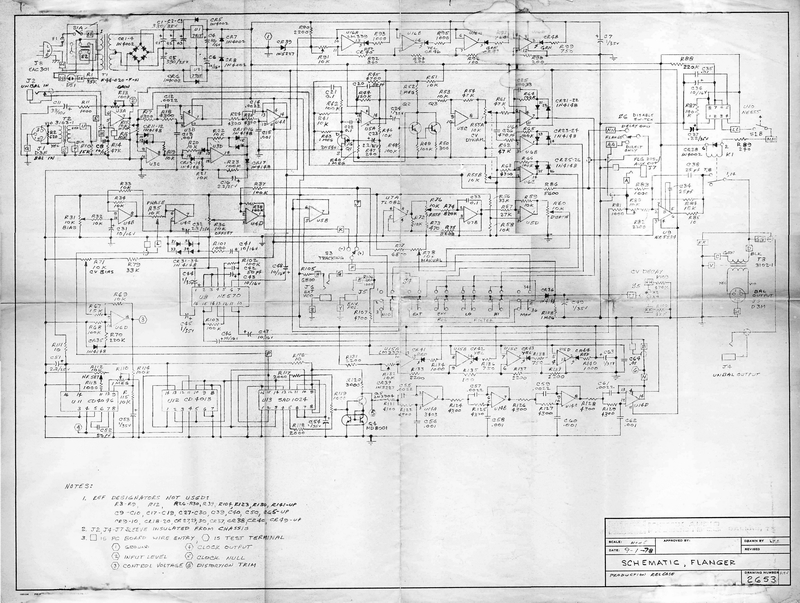 When I drew the block diagram we must not have coined the "DynaFlanger" name yet. 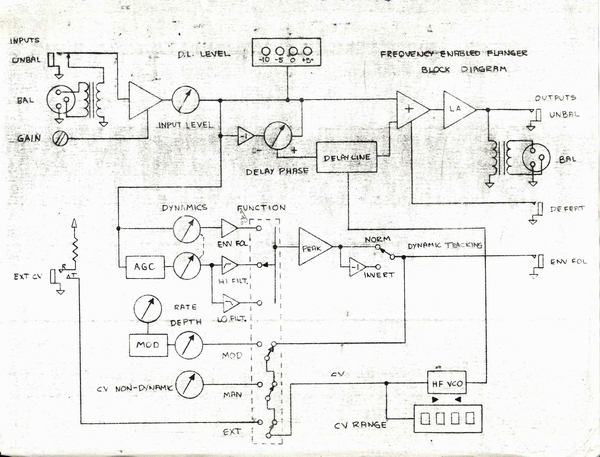 The input stage is comprised of U3A. U3B and U4A are the anti-aliasing low pass filter.
U3C is a diode "predistorter" for the input level meter. CR11 and CR12 negate the forward voltage drops of diodes CR13 and CR14.
CR17 is a peak detector. CR17's forward voltage drop is compensated by CR15 and CR16.
The output of the peak detector feeds comparator string U16A-D.

Q1 is a shunt-connected JFET which, along with U5A and Q2/Q3 provides AGC to compress audio level.
U5C raises the output level of the AGC and feeds one section of the CV dynamics control, R55A, to provide a leveled signal for the frequency tracking circuits.

U6A is a low pass filter with diode predistortion to compensate for the forward drop of CV detector diode CR36.
U6B is a high pass filter also with predistortion.
U6C is the Envelope Follower and is fed by uncompressed audio by R55B.
The outputs of U6A-C feed the Mode Selection switch positions "Env, Lo and Hi."
For Dynamic control, the mode selector switch feeds a simple peak detector formed by CR36, C49 and R108.
The CV decay rate is lowered by switch S5 and R100/109.
U5B buffers the peak detector. U5B's output then feeds the mode selector switch S4.

U7A, U7B and U5D form a triangle wave oscillator.
R76 varies the rate, R60 sets the amount of modulation.
Manual control of CV is set by R78.
The output of the Depth and Manual controls feed the Mode Selector Switch.

The final output of the Mode selector switch is at point "J."
U4D inverts the CV.
Switch S3 selects the direction of CV tracking.
The output of S3 feeds both the high frequency VCO and the CV dynamics meter.

U15A-D are a four segment bargraph to provide indication of Control Voltage.

U6D buffers the control voltage and provides a trim for the VCO's lowest frequency using R71 as an adjustment.
The HF VCO is a CD4046 PLL.
R112 sets the maximum clock frequency.
The clock output is seen at point "4."
U12 divides the clock by two to provide an exact 50% duty cycle.
To obtain higher output drive current for the SAD1024 BBD both CD4013 D flip-flop sections are in parallel.

An NE570 is used as a compander to improve the noise performance of the SAD1024.
Input to the NE570 is fed from the output of U4A.
The output of the NE570 feeds U4C.
Diodes CR31-34 provide additional limiting and compander output overshoot protection.
U4B serves two functions.
The first is to invert the input via R35 to provide polarity inversion to change the type of effect from additive to subtractive.
U4B also provides the bias voltage for the SAD1024 input and is adjusted by R31.
R31 is the THD adjustment for the SAD1024.

U13 is 512 stage SAD1024 connected in "parallel multiplex."
This configuration allows the SAD1024 to operated as a lower distortion, lower noise, 512 stage device.
The sampled outputs of the SAD1024 are combined by R117-R119.
R119 is adjusted to minimize the steps between alternate sample outputs.
Q4, a dual transistor and Q5 provide a current mirror output to lower the SAD1024's distortion.
U14A-D are an 8 pole filter to reconstruct the SAD1024 output.
U4D feeds the NE570 compander's decode input.
The NE570 decode output feeds C46 before sending it to the final output stage.

When the DynaFlanger was being designed the NE5534 was a new part.
Due to it's low noise, high slew rate and 600 Ohm drive capability we chose it for an output.
In 1978 they were a little hard to get and expensive.
Our first prototypes used the TDA1034 moniker.

R80-R83 and R86 and S6 mix the direct and delayed paths to provide flange, delay only or direct-only outputs.
U10 and K1 provide turn-on delay for the output.

There are a few things I would have done differently looking at it now.
One thing I later tried was exponential control of CV just prior to U6D.
Expo provided a cooler tracking effect and made adjustment far easier.
When I tried this I had left MicMix a few years earlier and the DynaFlanger was no longer being produced.
https://ka-electronics.com
Top
Post Reply
1 post • Page 1 of 1